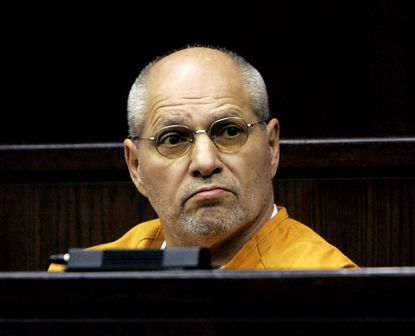 A reputed North Jersey mob figure who spent more than a decade on the run from a murder investigation was once part of a notorious Genovese crime family hit team known as “The Fist,” according to government documents filed in U.S. District Court in Brooklyn.

Michael Coppola, who goes on trial this week in a racketeering-murder case, was part of a Mafia assassination squad that “performed murders ordered by the Genovese family administration” in the late 1970s and 1980s, prosecutors said in a motion filed last month.

One of those murders, the 1977 killing of mobster John “Johnny Coca Cola” Lardiere, is part of the pending racketeering case against Coppola, who fled New Jersey in 1996 as state authorities sought a DNA sample they hoped would link him to the long-unsolved gangland slaying.

Described in a second government motion as a seasoned Mafia enforcer, Coppola served as “the right-hand man to Tino Fiumara, a powerful and violent . . . crime family captain [and] part of the Genovese family administration,” even while living in hiding, prosecutors allege.

Fiumara was labeled an unindicted coconspirator in the pending case.

Coppola, 63, is facing racketeering and conspiracy charges that include the Lardiere murder and the systematic extortion of an International Longshoremen’s Association union that works the New Jersey waterfront.

The labor-racketeering charge stems from an ongoing federal investigation in which authorities allege that the Genovese and Gambino crime families have used violence, intimidation, and extortion to corrupt the ILA and control the docks in Manhattan, Brooklyn, Staten Island, and North Jersey.

A civil suit filed by the U.S. Justice Department alleges the mob generates millions of dollars through a labor-racketeering scheme that one law enforcement expert said echoes the 1954 movie classic On the Waterfront.

While not part of the current case, federal authorities also allege Coppola and Fiumara, the Genovese crime family’s reputed New Jersey boss, orchestrated the 2005 slaying of Lawrence Ricci, an ILA official then on trial for racketeering.

Jury selection in the Coppola case begins tomorrow in Brooklyn federal court. For security reasons, prosecutors have asked that the members of the panel be chosen anonymously.

The trial is expected to include hundreds of secretly recorded, wiretapped conversations that allegedly tie Coppola to the corruption of ILA Local 1235, based in Newark.

In one phone conversation Coppola is heard bragging about how the mob controlled a former union president.

“We were right next to him all the time during this whole thing,” Coppola is quoted as saying.

The indictment alleges that since 1974, the Genovese crime family has had its hooks into Local 1235. During that time, investigators say, the mob arranged no-show jobs for associates, extorted shipping companies by threatening labor slowdowns and work stoppages, and received hundreds of thousands of dollars annually in tribute payments from the union itself.

Two underworld informants, George Barone, a mob soldier and former ILA official, and Thomas Ricciardi, an admitted Lucchese crime-family hit man, have provided information about Coppola, according to court documents, and are expected to testify in the pending trial.

Identified only as “CW” (cooperating witness) in several pretrial motions, Ricciardi has told authorities that Coppola boasted about the Lardiere killing, which took place in the parking lot of a Somerset County motel on Easter Sunday 1977.

Lardiere was serving a sentence for contempt at the time, but had been granted a two-day prison furlough. Authorities said the Genovese crime family ordered him murdered because, while in prison, he had gotten into a fight with and shown disrespect to a high-ranking mobster who was also in jail.

Coppola became a “made” or formally initiated member of the Genovese organization after carrying out the hit, authorities say.

The shooting, which Ricciardi has said Coppola confirmed to him when they first met in 1983, has taken on folklore status in the New Jersey underworld.

Coppola allegedly approached Lardiere in the parking lot of the Red Bull Inn, pulled out a gun, and tried to open fire. But the gun jammed.

Lardiere laughed and said, “What are you going to do now, tough guy?”

With that, the story goes, Coppola reached for another gun he had in an ankle holster and shot Lardiere five times.

Prosecutors also had hoped to use testimony from Ricciardi to link Coppola to the 1988 slaying of Ray “The Barber” Barberio, who was killed in the Downeck section of Newark. Barberio was slain, authorities say, for failing to pay a loan-sharking debt he owed to the Genovese organization.

Ricciardi told authorities that while having drinks with Coppola a few nights before the murder, Coppola told him he was “on the road,” an underworld phrase that meant he was actively assigned to a murder. He said Coppola also showed him the gun he was carrying.

After Barberio was killed, Ricciardi said, two other mobsters told him Coppola was the hit man.

A federal judge, however, responding to a motion filed by Coppola’s lawyer, has barred any testimony about the Barberio hit, ruling that it might unduly prejudice the jury.

It was also Ricciardi who told authorities that Coppola, along with Fiumara and several others, comprised the Genovese hit team known as “The Fist.” He said the group was based in the Downeck section of Newark, a once predominantly Italian American neighborhood where, in the 1980s, several crime families maintained clubhouses.

Coppola spent more than 10 years on the run before he was arrested on the Upper West Side of Manhattan in March 2007. Authorities say he and his wife, using aliases and aided by the Genovese organization, lived in an apartment there and in another in San Francisco during the decade that New Jersey authorities searched for him.

The DNA test, which was administered after he was apprehended, proved inconclusive.

A murder charge against Coppola stemming from the Lardiere killing is still pending in Somerset County.

Coppola and Fiumara remain targets of an ongoing federal investigation into the Ricci murder, which, authorities allege, was carried out by Coppola on Fiumara’s orders.