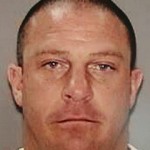 The Colombo crime family must really be going to the dogs if this is the type of muscle they’re recruiting.

Before legendary Colombo underboss John (Sonny) Franzese pricked Souza’s finger with a sterile diabetic needle in 2005 to make him a made man, Souza had built quite the fiasco-filled résumé.

There was the time he shot himself, Plaxico Burress-style, while tucking a handgun in his sweatpants. There’s his arrest for boating while drunk. And then there was the time he injured one of his fellow goons while the two busted up a funeral parlor.

If an organization is no better than its worst guy, then the Colombos are indeed in trouble.

And what thanks do they get for taking in this mopey mobster? He’s now turned stool pigeon.

Souza, 42, made his debut on the witness stand last week at the racketeering trial of Genovese gangster Anthony Antico in Brooklyn Federal Court.

He was facing 30 years to life for drug trafficking when he sought a cooperation agreement from the feds.

“‘Hello, John,’” he wrote to John Buretta, the chief of the Brooklyn U.S. attorney’s organized-crime section, in 2008, offering to help “seal up” some federal cases.

“P.S. I am so ready to go to [the witness protection program] … can’t do this anymore,” Souza concluded.

His testimony – and dramatic turn against the bosses – speaks to the Colombos’ disarray and lowering of standards for supposed “men of honor.”

“Their [the Colombos’] roster is getting pretty thin,” conceded a law enforcement official.

He was “honorably discharged” from high school because “I baseball-batted somebody on school property,” he testified. He instead graduated to loansharking, drug dealing and running a Staten Island gym called Evolution, where wiseguys and wanna-bes pumped iron.

And after assaulting his own wife, he was marked for death by his mobbed-up father-in-law.

But maybe worst of all was violating a previously unknown rule by exposing himself in a Staten Island bar owned by a gangster.

“You know, the rules, you don’t take out your private part in a wiseguy’s place,” Souza said on the stand, in describing his past with the mob.

In Souza’s bizarro world, “sitdowns” to settle beefs are now called “standups” – “you talk on the corner.” And he paid the medical bills for a guy whose eye he popped out during a grisly fight.

But Souza said he sees the Mafia more clearly now. “There’s no honor in this life. It’s all about the dollar,” he said.