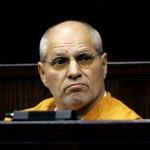 A New Jersey wiseguy was collared Monday in a 1992 rubout of a Genovese gangster suspected of ripping off family-run gambling dens in the Bronx, police said.

Paul (Doc) Gaccione was nabbed at his home after a grand jury indicted him for murder in the gangland rubout of Angelo Sangiuolo, whose bullet-riddled corpse was found in a van parked at a Bronx McDonald’s in June 1992.

Gaccione is charged with being the getaway driver for triggerman John (Johnny Balls) Leto, who was convicted of the killing last year.

“Obviously, he’s not the brightest of lights,” a police source said of Sangiuolo. “He’s an associate of the family he’s hitting.”

After then-Genovese boss Vincent (Chin) Gigante gave his blessing, Prisco assigned the job to Gaccione and Leto, and concocted a ruse to lure Sangiuolo to his Bronx social club.

Prisco promised Sangiuolo he would help him with a problem he was having – but the doomed mobster was quickly given the dreaded order to “take a ride” with Gaccione and Leto, police sources said.

Investigators believe Gaccione drove the van, with Sangiuolo riding shotgun and Leto in the backseat, to a McDonald’s in Pelham Bay.

Once at the lot, Leto waited for a subway train to rumble overhead – and then pumped Sangiuolo full of bullets, the sources said.

Prisco, who got a life sentence in a federal trial last year, picked up Gaccione and Leto at the McDonald’s and helped them ditch the murder weapon.

Gaccione was due to be arraigned in the coming days.